Scientists have been working on creating batteries to replace our current lithium-ion ones and the search continues for the best battery storage.  Nowadays, you may take batteries for granted, perhaps not thinking twice about just how useful they are, as they’ve always been a part of your life. The evolution of batteries has been monumental. So much so that this year’s Nobel Prize for Chemistry was jointly awarded to three scientists who invented our modern-day lithium-ion batteries.

However, as time passes, most inventions need to keep up and be updated. The search for the batteries of the future has started.

Alternative batteries and storage systems
When the words “renewable energy” are uttered, your mind may automatically jump to solar panels, electric cars, and wind turbines. However, the actual batteries that run and store energy for these electric cars; for example, most likely do not come to mind.

The Karlsruhe Institute of Technology (KIT) in Germany is already working hard on discovering new methods for storing energy for future use. Storage plays a massive role in the world of sustainable batteries and their production. 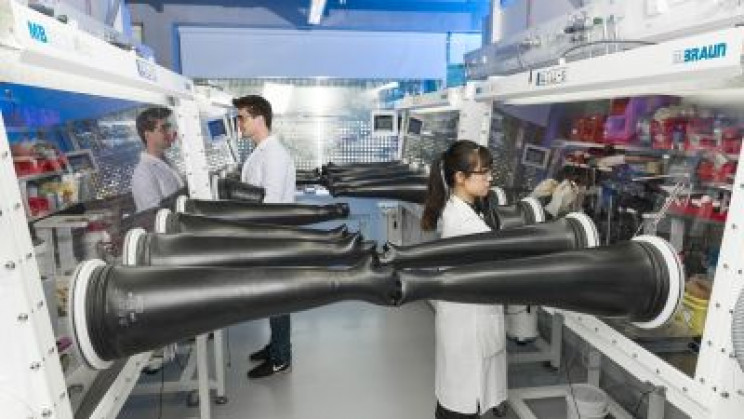 The research on suitable battery materials is essential for the development of sustainable energy storage.

At the moment, sustainable batteries come in the form of lithium-ion batteries, which power many devices, from our mobile phones and laptops to e-bikes. And in order for these types of batteries to function, lithium and cobalt are needed.

However, the day has now come when scientists are questioning the fair production of lithium-ion batteries. Furthermore, their disposal is an issue for many, with higher risks and problems associated with the current methods used.Ultimately, the questions of how efficient these batteries are, and what new storage methods are being built around them are being posed. Questions that the KIT lecturers and researchers are attempting to answer.

There have already been attempts at creating alternative battery options — for instance, saltwater batteries, hydrogen fuel cells, and post-lithium technologies. But, there’s been little focus on how these future batteries would be efficiently stored.

Keller continued, “The biggest driver toward a high penetration of renewable energy will be storage.”

The search for the best storage methods continues, but it’s a step in the right direction for renewable energy of the future.

END_OF_DOCUMENT_TOKEN_TO_BE_REPLACED

At least for several weeks, pay will be reduced for those who continue to work. Others will be furloughed without pay. According to Bloomberg, who obtained an internal memo, Tesla will temporarily cut pay and send some of the employees on furlough as the production...